Early one morning, while my wife and I were taking our dog out for a walk, we heard some birds chirping quite loudly.  We looked across the street where the cacophony was, and we saw some brightly colored birds high in our neighbor’s tall palm tree. They were chirping and flitting from one place to another high in the crevices of the trimmed palm fronds.

Since there were only a few of them, we suspected that they were fugitives from a cage in the home of a nearby neighbor. We began looking out for them each morning, and over time it became apparent that there was quite a colony of these pretty birds living in this tree. A friend told me that they were Arizona Lovebirds, and they were widespread in the area. I did some research and came across a few articles on these very pretty little birds.

According to the Journal of Arizona Field Ornithologists, these birds are Rosy-faced Lovebirds (Agapornis roseicollis). They are small feral parrots, that have been breeding in the area for over 30 years. It’s not typical for exotic birds to survive in the wild. However, it is believed that the opportunity for them to thrive in our dry desert climate, is due to the availability of water and nesting provided by humans. This population in the Phoenix area is thought to be the only feral population of the Rosy-faced Lovebirds in the United States. 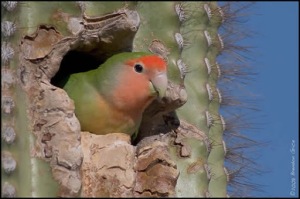 This entry was posted in lifestyle and tagged Arizona Lovebirds, birds, Rosy-Faced Lovebird. Bookmark the permalink.