I spent a number of years working for a local Phoenix appliance distributor, selling major appliances to home builders. Later in my career, I went to work for the Maytag Company to help them get new business for their Maytag, Amana, and Jenn-Air brands in the Western U.S.

Maytag was making a push to grow their business in this sector, and they had hired several experienced builder specialists. Early on, we had a welcome get together at Maytag headquarters in Newton, Iowa.

We had dinner one evening at the Newton Country Club. When the waitress came by for drink orders, I asked for a glass of Chardonnay. When she brought my drink it had a fruity taste, not at all like Chardonnay. I mentioned this to her, so she returned with the bottle. It was Riesling. I pointed this out, and she replied, “Oh yes, that’s what we call Chardonnay.” Who knew you could do that? Later that evening I discovered that the golf course was an 11 hole layout. Somehow, it was all beginning to make sense.

Newton is a town of 15,000 residents about 30 miles from Des Moines, Iowa. I would rent a car for the half hour drive from the airport in Des Moines to the Maytag Headquarters. The downtown center of Newton is the Jasper County Courthouse.

Each time I passed the Courthouse, I was reminded of the movie, Back to the Future. In front of the courthouse is diner, the Midtown Cafe. (Last Thursday’s special was tater tot casserole.) Farmers from the area gather there for their morning coffee and have the weather, and the crop reports blaring on the radio. Down the street there is a Maid-Rite, a fast food chain in Iowa, and nearby states. They are famous for their loose meat sandwich, a hamburger made from well…loose meat…no patty…just loose meat on a bun. I know; I don’t “get it” either. 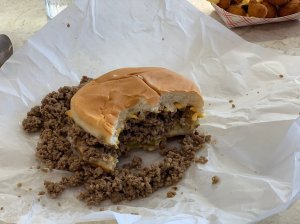 There was a Radisson Motel across the street from Maytag’s headquarters where we always stayed. Our hangout while in Newton, was the Scoreboard Bar and Grill- mostly bar, not much of a grill. That was really the only watering hole for those of us who were staying at the Radisson. Not much of a night life in Newton. For dinner, we usually drove somewhere outside of Newton. My favorite, about a half-hour drive to Grinnell was The Depot Crossing Restaurant. Named for the nearby train stop, the train still went by, it just didn’t stop there any more.

In addition to my regular visits to Maytag for business meetings, I was also responsible for product training for our western Maytag dealers and distributors. Maytag had a well-equipped training center in Newton, and I would regularly host 10-12 sales associates from builder distributors in my region to a 3 day 2 night trip to Newton, Iowa. We’d have a nice evening out on the first night, and on the second night the group would actually cook their own dinner in the Maytag and Jenn-Air kitchens supervised by one of Maytag’s home economists. The wine would flow freely, everyone had a great time, and we learned how to cook on the appliances that we were selling. The final day was a half day wrap up before departing to Des Moines for our flights home. 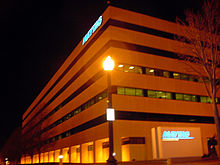 In August 2005, Maytag was purchased by Whirlpool. On May 10th 2006, I was in Newton finishing up a training session. When I woke up in the morning I looked out my hotel room and noticed a couple of trucks with TV station markings and antennas in front of the training building. I knew something was up. My group was scheduled for a morning session before heading to the airport for our flights home. Well, that morning one of the facility managers came in to ask me what time she could have the training room. I told her that we’d be leaving the room at 11:30 to go to lunch. She wanted to be sure because they needed the room by noon. She was quite adamant.

Our training room had a very nice appliance display in the front of the room where we had a speakers podium. The President of Whirlpool had flown in that morning to announce that Whirlpool was closing three Maytag factories as well as the Maytag headquarters in Newton, Iowa. They were going to use that backdrop in our training center for him to make the announcement.

WOW! I made sure that our 11:30AM lunch was quick, and that we were all in our cars and headed to the airport before all hell broke loose. I got to keep my job and worked for Whirlpool for several years before retiring. Newton, Iowa has survived and seems to be about the same, but I’m sure that they miss those good Maytag jobs.