Fast and Furious Innovation from Maytag

Beginning with the *ill-fated Maytag Neptune washer launched in 1997, Maytag followed with a steady stream of innovative products into the early part of the following decade. All of these appliances were based on interesting and I'd say clever concepts. They included the Wide-by-Side Refrigerator, the Gemini Double Oven Range, the 3-Rack Dishwasher, and the Drying Cabinet. Only one of them took hold.

Clearly the most successful of these innovations, and the one that still exists today is the Double Oven Range. It is certainly my favorite and something that I purchased for my new home in 1999, a year before I went to work for Maytag. (Full disclosure. I worked for Maytag's builder division 200-2004, then moved to their Jenn-Air division where I stayed through 2011. Maytag was purchase by Whilrpool in 2006). 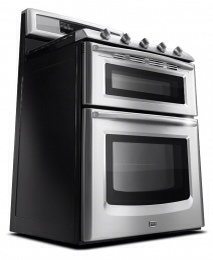 The innovation of a double oven range didn't involve cooking with a new form of energy, magnetic current, or steam, and required no consumer education, no changing of recipes, or new cookware. The glory of what I dubbed intuitive innovation was that consumers only needed to look at the product to understand what it was. They “got it” immediately. Some didn't like it and thought it impractical because the second oven was small. However, enough people did like it and were captivated by the idea of:

a: having two ovens in a single appliance so that they could simultaneously cook different foods at different temperatures, for different periods.

b: not needing to heat up the big oven when they only wanted to prepare something small, reheat, toast, broil, etc.

The Gemini range did a nice job of toasting, so we kept our countertop uncluttered since we needed neither a toaster nor toaster oven. We had the ability to cook in both of the Gemini ovens at the same time, but that really happened only during holidays. We used the small upper oven for our daily needs and used the lower oven for occasional baking. Living in Arizona, we appreciated being able to use the small oven and not heat up the kitchen. We were able to cook small roasts, chickens, etc. in the upper oven. My wife absolutely loved it, and still misses the convenience. (We moved in 2005, and left our Gemini behind).

Today, all major brands have some version of a double oven range in their lineup. Next up – What appliances are no longer around that you'd like to see brought back?

*It's hard to write Neptune Washer without preceding it with the words “ill-fated”. However, even though Neptune performance problems led to a class action lawsuit, the Neptune washer helped change the industry. Neptune was the first full-sized front load washer in the U.S. Whirlpool's Duet soon followed. Today we have a much different appliance industry because of the full-sized front loading washer.

1 Response to The Maytag Innovation Years